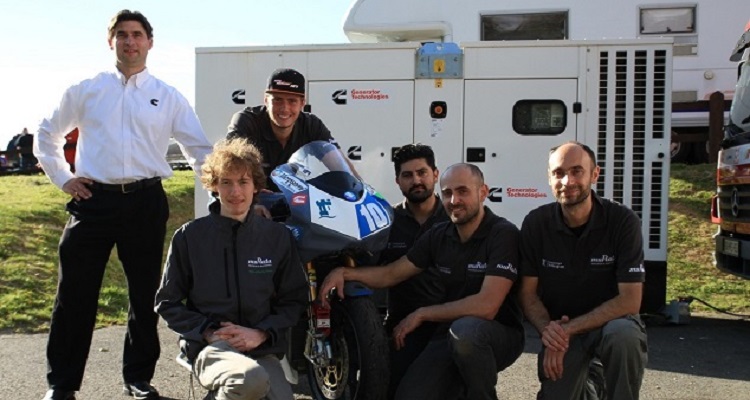 On a sunny Sunday in September at the Cadwell Park Racing Circuit in the UK, Cummins Generator Technologies supplied power to energy-hungry electric motorbikes competing in Round 3 of the European Championship of the Electric Motor Bike and Super Bike series, known as MotoE. Cummins supported all five teams with a generator set that delivered power for the entire event.

Furthermore, Cummins had a hand in the up-and-coming technologies that were successfully demonstrated at the event: the capabilities of electric motorbikes.

The Research and Technology (R&T) team, based out of the Stamford manufacturing facility, worked extensively with the University of Nottingham's Cummins Innovation Centre, where researchers are applying the latest power electronics and energy storage technology in order to secure a winning place in the championship.

Recent development of lithium-ion batteries has allowed electric motorbikes to perform the same or better than conventional petrol motorbikes. Experienced motorbike racer Daley Mathison, holder of three track records at Cadwell, piloted the #10 UoN motorbike and garnered the fastest lap time during the event. Under the bodywork, the UoN motorbike has a 10,000 rpm permanent magnet electrical machine, which can deliver peak power of 200 kW and, together with 12 kWhr lithium polymer batteries and powerful electronics, propels the machine to a maximum speed of 180 mph. There is no gearbox and the electrical machine output is directly chained to the drive wheel.

A great advantage of electric motorbikes is the energy recovery system. Whenever the rider releases the throttle, kinetic energy is captured and stored in the batteries to be reused.

For the Cummins R&T team, such an event is a great opportunity to see power electronics and energy storage technologies, which might later be used in Cummins products, tested in extreme conditions. It also gives students in this fast-developing field exposure to Cummins and its products.

For more information on the race: